The Story of a Legend

Indian Motorcycle® Returns, Better Than Ever

The 2010s have been a decade full of exciting development and growth for Indian Motorcycle. We’ve built a bright future upon our legendary past through technological innovations, rewarding partnerships, and an ever expanding lineup of authentic, iconic bikes.

In 2003, Indian Motorcycle Company of America went bankrupt and ended production. The future of America’s first motorcycle company was uncertain.

Returning a Legend to its Former Glory

The Death of Two Legends

Clymer died of a heart attack in 1970 and his attorney, Alan Newman, acquired the Indian Motorcycle trademark. Newman continued to sell small bikes carrying the Indian brand name. Most of these bikes were produced in Taiwan and had displacements between 50cc and 175cc. Other units were rebranded Italian mini-bikes. Sales declined throughout the 1970s and operations ceased in 1977.

Munro started claiming a number of New Zealand land speed records in the 1940s, and by the 1950s his Scout was too fast for New Zealand’s speed courses. He formed a new goal—to race on the flat, expansive Bonneville Salt Flats. Over the years, Munro and his Scout raced on the Bonneville Salt Flats nine times and set world records in three of them, culminating in his final trip—and record setting ride—in 1967. Burt Munro was inducted into the AMA Hall of Fame in 2006, a tribute to the pursuit begun eight decades earlier.

Dominating the World of Motorcycle Racing

The Indian Motorcycle Wrecking Crew TM—made up of legendary racers Bobby Hill, Bill Tuman, and Ernie Beckman—formed in the late 1940s, and by the early 1950s were dominating on both dirt and road courses. Among their signature wins were three straight Springfield Mile victories. Hill won the Springfield Mile in 1951 and 1952 and Tuman won it in 1953. The three also won season points titles and major events from coast to coast.

From 1940 until 1945, Indian Motorcycle focused its efforts on contributing to the Allied cause in WWII, at first building motorcycles for the French government and, starting in 1941, producing the Model 841 for the U.S. Army. Very few bikes were built for consumers during this time.

In 1945, The Du Pont brothers sold the company to Ralph B. Rogers. Rogers also purchased the Torque Manufacturing Co., in part to utilize the talents of former Indian Motorcycle engineer G. Briggs Weaver, who worked for Torque and was designing several models Rogers wanted Indian Motorcycle to produce.

The first post-war lineup consisted only of the Indian Chief as design and production were ramped up for consumer models. In 1948, new vertical twin 440cc Indian Scout models and vertical single 220cc Indian® Arrow® models were introduced to compete with the growing number of lightweight foreign imports.

Continued Growth in a Poor Economy

In the early 1930s the nation’s poor economy depressed motorcycle sales, including those of Indian Motorcycle. Still, the company continued its pursuit of perfection and introduced the 1936 “upside-down” four, which had an exhaust over intake (EOI) design, as well as models featuring instrument panels atop their fuel tanks.

Ed Kretz won the first Daytona 200 on a race-prepped Indian Sport Scout in 1937. In 1938 a Sturgis based Indian Motorcycle club known as the Jackpine Gypsies held a race called the Black Hills Classic. This race evolved into the Sturgis Motorcycle Rally.

The early 1920s were important years in the rise of Indian Motorcycle as several iconic motorcycles were introduced to the public. In 1920, the company released the first Indian Scout. This fast, reliable, maneuverable bike enticed many people to start riding. This was followed by the Chief (1922), the best-selling Big Chief® (1923), the Prince® (1925), and, following the purchase of Ace Motor Corporation, the Ace® (1927).

In 1923, the company changed its name from The Hendee Manufacturing Company to The Indian Motocycle Company—no “r” in motocycle when the word was used with the name Indian.

Indian Motorcycle introduced its legendary 45-ci, 750cc V-twin engine in 1927. This larger version of the Scout engine would go on to be viewed as one of the best engines Indian Motorcycle ever built.

These advancements led to new heights and broken records for the company:

In 1916, co-founder George Hendee resigned as company president and in 1917 the United States entered into WWI. Indian Motorcycle dedicated much of its production to the war effort. As a result, dealers had limited inventory and retail sales dropped significantly. The company provided the U.S. military with nearly 50,000 motorcycles from 1917-1919, most of them based on the Indian Powerplus model.

The first Indian Motorcycle was sold to a retail customer in 1902, and later that year an Indian Motorcycle won an endurance race from Boston to New York City in its public racing debut. Racers went on to win events and establish records riding Indian motorcycles:

In 1906, the first V-twin factory race bike was built. A version of the racing engine was introduced in consumer models for the 1907 model year, making the 39-ci (633 cc), 42-degree V-twin the first American V-twin production motorcycle engine. 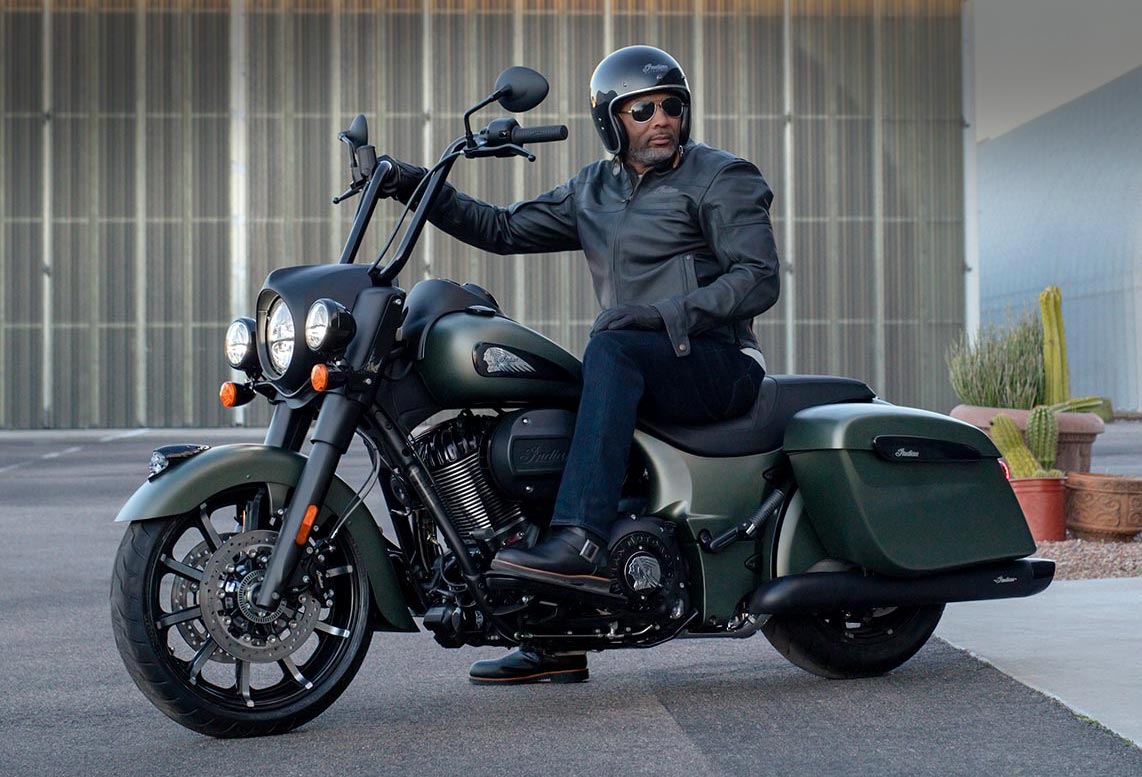 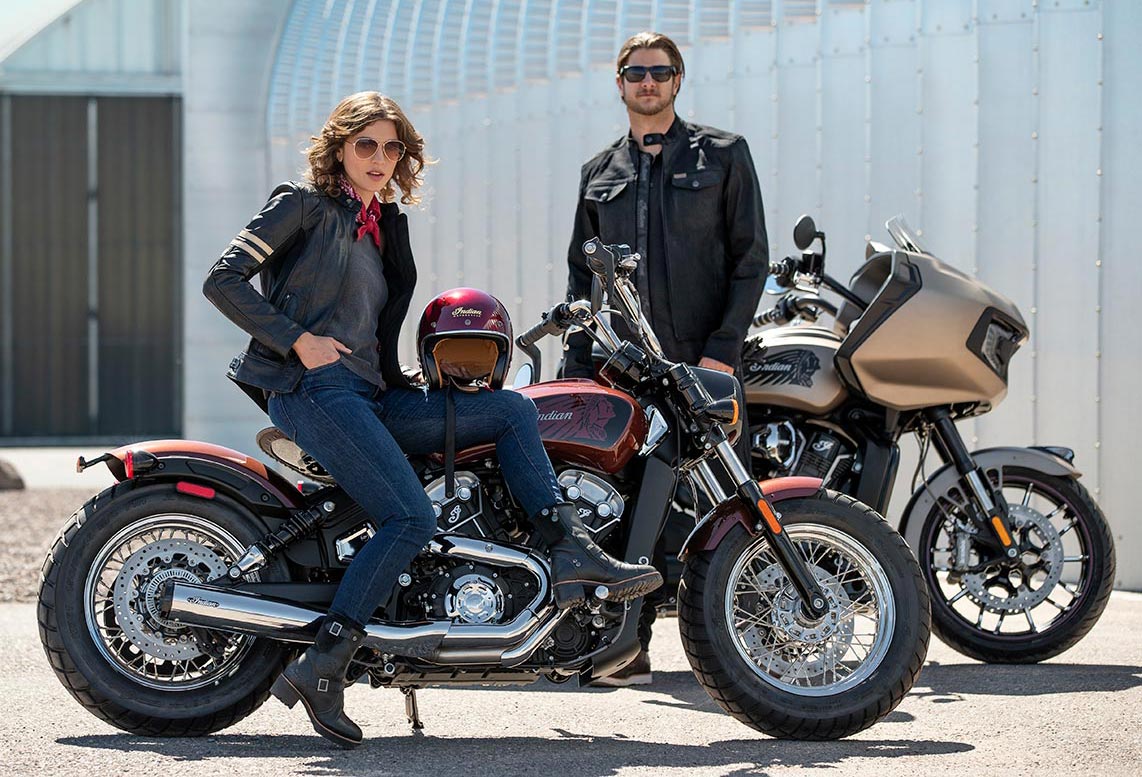 FIND A DEALER NEAR YOU